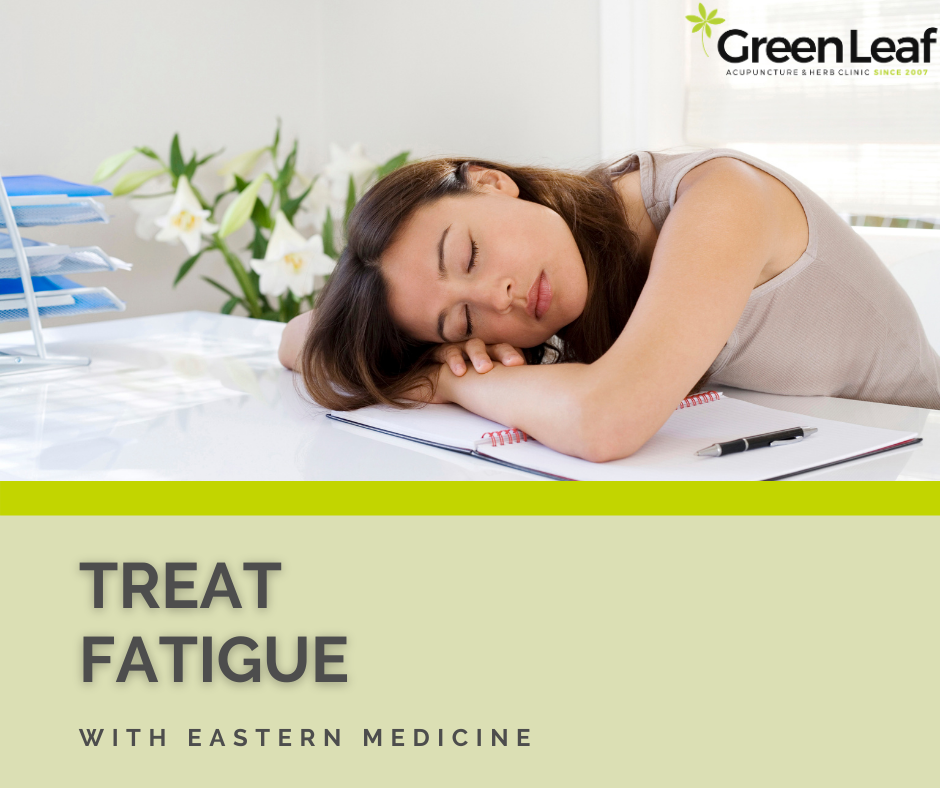 Fatigue can occur for a number of reasons. Whether you are not getting enough sleep, overworking your body, exerting too much physical activity or not eating the right nutrients, your body may become too stressed and result in displaying signs of fatigue. The list of causes does not end here. It comes in many forms and has many causes. Other causes of fatigue include obesity, adrenal malfunction, blood sugar imbalances, hormonal imbalances, digestive system disorders, food allergies and more. The most important factor in treating fatigue is determining the imbalance in the body which is the primary cause. From there Eastern medicine can treat fatigue through acupuncture, moxibustion, nutrition, hormone profiling or supplementation.

The two most common diagnoses of chronic fatigue are deficiency of qi and blood.

Signs of qi deficiency may not reveal any abnormalities when looked at physically, however, the internal state of the body may be weak from various causes. A deficiency in qi means there is insufficient energy for the organs to perform the important functions in the body. As a result, other symptoms may arise such as a weak pulse, pale tongue, shortness of breath and poor appetite. Most treatment methods for qi deficiency are therefore targeted at the lungs, spleen and kidneys. Acupuncture can be an effective form of treatment for strengthening qi and bringing energy to deficient organs. Moxibustion is similarly also helpful in increasing qi flow throughout the body.

Blood deficiency occurs when there is insufficient blood flow in the body to nourish the organs and tissues. Depending on the extent of blood deficiency, symptoms may include decreased bone marrow function, iron deficiency and general malnutrition. A more severe form of blood deficiency is called anemia. Anemia causes many disruptions in the body’s organ functions such as the heart, liver, spleen and kidneys. Herbal medicine and moxibustion are two methods of Eastern medicine treatment for normalizing blood count.

Although Eastern medicine practices help in treating fatigue, it is always advised to make adjustments to lifestyle habits as well. The two most valuable ways to treat fatigue by yourself at home are through diet and rest. Eastern medicine views diet as a key role in health. What you consume directly affects the overall health of your body. In Eastern medicine, the stomach represents the centre of the body’s qi movement. Therefore, what you put in your body directly affects your qi. It is advised to avoid alcohol, excess sugar and cold foods, while warm, nourishing foods are encouraged. Rest is another important factor in treating fatigue. Something as simple as getting enough rest can help restore the body’s energy and yin balance.

There are many solutions out there to relieve fatigue, however, many of these solutions are only temporary. Eastern medicine not only reduces symptoms of fatigue but targets the source of it so that future cases of fatigue are minimized. Relying on temporary solutions is not only merely temporary, they can actually be more harmful in the long run in some cases. Eastern medicine treatments on the other hand, can leave you feeling refreshed and relaxed with little to no side effects.