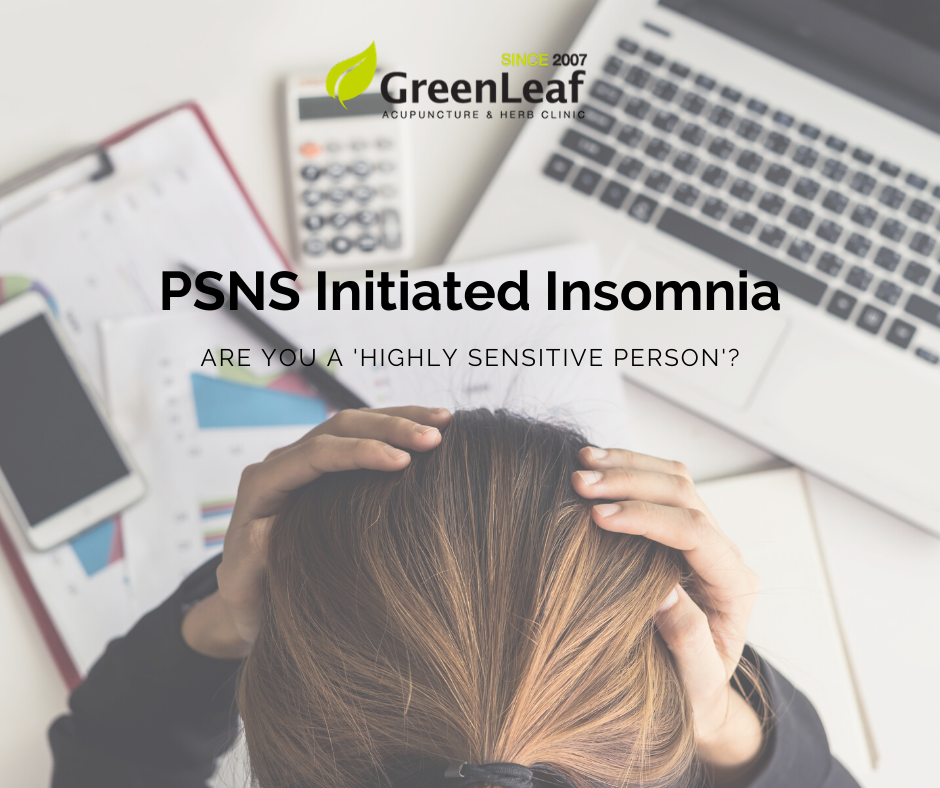 In the book, “The Highly Sensitive Person,” author Elaine Aron presents criteria used to self-identify as a sensitive person.  A subset of statements, caught our attention:

As an Eastern Medicine practitioner, we often ask my patients questions that elicit these types of answers. Questions focused on mental and emotional well-being are asked to distinguish, for example, parasympathetic insomnia from other types of insomnia.

In our last column, we explained that the sympathetic nervous system (SNS) is in action when you are anxious or nervous. In contrast, the parasympathetic nervous system (PSNS) is in action when your body relaxes. Distinct personality traits are associated with SNS initiated insomnia, and different ones with PSNS initiated insomnia.

Those with a hyperactive SNS tend to be people who are

Those with an unstable PSNS tend to be

The person with an unstable PSNS shares characteristics with a ‘Highly Sensitive Person’ described above.

Such people are more likely to suffer from insomnia during their lifetime because their parasympathetic nerves are unable to control the sensitive sympathetic nerves effectively. Their PSNS is, essentially, underperforming its calming role. This manifests itself in problems sleeping at night, with ‘Highly Sensitive’ people left worrying about a million things, being super affected by drinking even a sip of coffee in the evening, or remaining anxious about an important meeting or presentation the next day. In addition to sleeping disorders, a ‘Highly Sensitive Person’ is more susceptible to digestive and panic disorders.

One of the interesting medical characteristics of a ‘Highly Sensitive Person’ is that they often do not present physiological problems. That is, they may see their doctor for abdominal pain, but all the tests and scans are negative, and so the doctor says you are fine, that there is no problem. Or, as the doctor cannot find the cause, and may suspect the pain is stress-related, he or she may make a diagnosis of “nervous disorder”.

In Eastern medicine, these patients are treated with an herbal medicine called “FuLing (Sclerotium Poriae Cocos).” FuLing is a sclerot that grows like a lump on the root of long-standing pine trees. It grows around the pine tree trunk at a depth of 20 to 50 centimetres, and can be found by poking with a long metal stick around the base of the tree. Recent pharmacological testing showed that FuLing is a diuretic, sedative and agent that lowers blood sugar levels.

In clinical practice, FuLing is often used together with herbs such as GuiZhi (Cinnamon twig) and GanCao (Licorice Root). Together, they are used for patients with physical symptoms such as feeling cold all the time, frequent urination, and palpitation. Importantly for the ‘Highly Sensitive Person’, this combination is also used effectively to address psychological characteristics and PSNS initiated insomnia.

Modern society has many social, mental, and physical stimulations that give advantages to people who are extroverted and which, in contrast, pose daily difficulties for the “Highly Sensitive Person”. No wonder so many sensitive patients suffer sleepless nights full of worry. It is my pleasure to provide them with relief through Eastern medicine’s trove of herbal medicines and understanding of the nervous system.