“Doctor, I Have Indigestion” 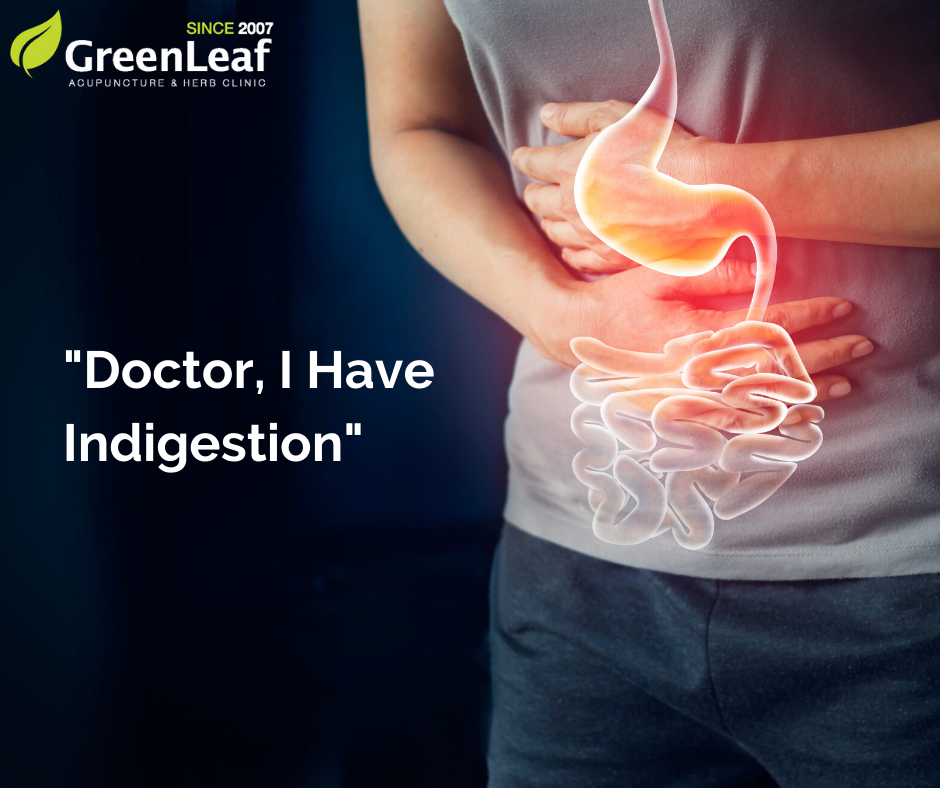 This is one of the most common complaints we receive at the clinic. However, because digestion can have many causes, it is crucial to have a more in-depth discussion with the patient. Indigestion is caused either by the congestion and inflammation of the solar plexus or by the bloating of the chest which induces a feeling of stuffiness. The first step is for the doctor to determine if the patient is suffering from indigestion stemming from the chest or from the solar plexus. Usually the next phase of indigestion is the restlessness of the stomach which is caused by gas build up. This however, is not just a sensation but is due to your stomach actually expanding from the gas. Consequently, you experience stomach aches when you are suffering from indigestion. These stomach aches, however, can have many differences: a poking, aching, twitching, or squeezing pain. Some complain of frequent burping – to the extent that it causes embarrassment in their daily lives.

So how do we sort out and treat these various symptoms? There is generally one symptom to focus on – the presence or absence of inflammation. Generally most people experiencing severe indigestion symptoms come to our clinic after a gastroscopy and/or an abdominal ultrasound. Some patients will say “Doctor, I saw my test results and have been told that I am okay.” In this case, the person is experiencing functional digestive disorder. In this digestive disorder, there is no inflammation because the indigestion is not caused by physical ailments but by emotions. The main focus for this next section is functional digestive disorder.

Our bodies get nervous when we are stressed. If a brown bear were to appear, we would run with the stakes of life and death. When your body is in a fight or flight response, you cannot afford to send blood to your gastrointestinal tract because most of the blood needs to be sent to your heart and muscles to keep you moving and alive. This also makes the secretions of mucus and gastric acid weaker, making digestion difficult, which is why indigestion can occur even when an endoscopy indicates that the patient does not have inflammation.

Ellen was a patient who always complained of indigestion and of a swollen upper abdomen. She would explain that sometimes she would feel nauseous and often experienced motion sickness. Ellen was a worrisome person and had a lot of thoughts. However, due to her personality, she had difficulty expressing herself and sharing her thoughts. She was sensitive to her relationships with people to the extent where she would have difficulty falling asleep. She also often got cold and complained that she felt depressed. Regardless, she took it up on herself to get an endoscopy but was told that there were not any problems.

Ellen is a typical case of dysfunctional digestive problems with no indication of inflammation. In Ellen’s case, the first symptom to treat were her emotional problems. In Eastern medicine, there is a very famous drug called ‘Poria’. It is a germ nucleus that grows like a lump on pine roots. It is most commonly used to aid proper urination, but it can also be used for patients who are easily surprised and are prone to have their heart pounding. We use it to treat neurological digestive disorders, panic disorder, and depression. For Ellen, it was not about treating the inflammation of the stomach, but stabilizing her emotions first.

Ellen was also prescribed acupuncture treatment to supplement her antiseptic medication containing Poria and ginger. Since then, not only has her digestion improved but her insomnia and depression have also been relieved. As her psychological state stabilized, order was brought to her digestive system. Thus, even if a stomach disorder is caused by stress, the treatment medication and methods differ greatly depending on the presence of inflammation and the body’s response to stress. This is one of the many reasons why Eastern medicine is highlighted in modern society for having customizable medicine.